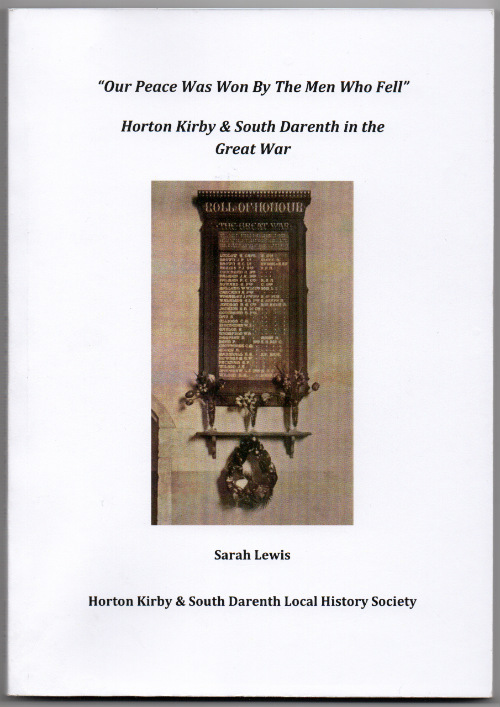 As has been frequently mentioned in our recent newsletters, the Society has now published our latest book.

This book looks at what happened in both the villages during the Great War and also features all the men mentioned on the War Memorial in St Mary’s Church, Horton Kirby as well as the men listed in the “Farningham Homes for Little Boys” Roll of Honour, also housed in St Mary’s Church.

Copies cost £6 (£5 for History Society members) and can be purchased from the Parish Office at the Village Hall.

If you are not a local resident but would be interested in purchasing a copy, please contact Sarahvlewis@yahoo.com.  First class postage will cost approximately £1.90 per copy.

Malcolm Scott was our speaker at our September meeting and he showed us the development of South Darenth before 1900, using old maps and his own collection of local postcards and photos. It was a fascinating look at buildings that have disappeared and what has since taken their place, especially around the bottom of Holmesdale Lane. However fragments remain, such as the bridge over the Darent to Malley’s Place, which we could see in photos from the 1880s showing mill buildings that have now gone.

Our AGM will be held on Monday 12th November at 8pm in the Horton Kirby Jubilee Hall, and as usual, we will be aiming to complete formalities within 10 minutes, and then I will be giving a very short talk about our new publication “Our Peace was won by the Men who Fell” – Horton Kirby & South Darenth in the Great War, followed by our Cheese & Wine evening.

As we have mentioned in previous newsletters, our new publication “Our Peace was won by the Men who Fell” – Horton Kirby & South Darenth in the Great War will be launched on Armistice Day, Sunday 11th November after the Armistice Day service in St Mary’s, Horton Kirby. Copies will also be available at the Beacon Lighting that evening.

The Battle of the Somme started on 1st July 1916, and the first day is notorious for the number of men who died or were wounded on the first day, making it the worse day in the British Army’s history.

The following men are from Horton Kirby and South Darenth, and they died during this battle, which lasted from 1st July to 18th November 1918

Robert died on the first day of the battle, and is described as killed in action, at the age of 27 and was buried at Citadel New Military Cemetery, Fricourt.

Robert was a regular soldier and was in the Royal Field Artillery by 1911.  His parents and his siblings were living at Franks Farm Cottages, Horton Kirby, and his father was described as a Cowman in 1911.

Percy died on the 2nd July, the second day of the battle, and was also killed in action, and is buried at Le Touret Military Cemetery, Richebourg-L’Avoue.

Percy enlisted on 22 November 1915 at Bromley, and gave his address as 6 Bexley Cottages, stating that he was a carpenter (working for Mr Fox, a builder in Horton Kirby), and he was 22 years  and 10 months old.  He went out to the front in France in April 1916, so did not serve for long.

Three of Percy’s brothers also served during the Great War, Lionel served as a stoker in the navy, Reginald was a rifleman in the Rifle Brigade and Lionel served in the King’s Royal Rifle Corps before being invalided out.

As the 75th Anniversary of the Evacuation of Dunkirk takes place,  there are two men on the War Memorial who did not come back from France.

William E Burberry was a Driver in the 17th Field Company, Royal Engineers, and died on the 1st June 1940 at the age of 25.  He was the child of Herbert and Ellen Burberry, of Horton Kirby, and is commemorated on the Dunkirk Memorial.

Donald L Gardner was a 2nd Lieutenant in the 2nd Searchlight Regiment, Royal Artillery, and was killed between the 22nd and 23rd of May, and is commemorated on the Dunkirk Memorial. Donald had been born in Malaysia, and had come back to England as a young child, his father Donald S Gardner lived at Kirby Hall in 1940.